The only piece of the receiver included is the front 3" section with the cams and barrel jacket mount.  The ejector plate rear rear tripod mount stud were stripped from the receiver and also included

Nice condition "dot" bolt with small chip on head but should function fine.

Non-matching bakelite stock. The stock has a minor crack and some dings (see pics)

Early pattern barrel carrier for MG34 with aluminum inserts.  Sling and paint both look original WW2 German.  The sling mounts to the carrier frame are not present.

Unnumbered feed tray.  There's a ding on the left side but functions fine.

The charging handle had been repaired at some point with the retention tab having been welded (see pics).  There's also some wear on the contact stud and a slight bend in the handle. We inserted this handle into an original MG34 and it functioned fine.

Early pattern adjustable bipod with early non-reinforced legs.  There are very few small markings on the bipod.  The only clear amp in on one of the legs (see pics) 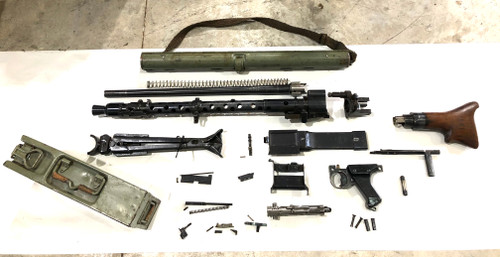