The Stemple Takedown Gun (STG) setups are new parts packages for unmodified/transferable Stemple 76/45 machine gun receiver tubes.
This setup was designed to be as smooth and controllable as a blow-back SMG can be from either the shoulder or bipod rest.  It makes use of an adjustable-weight bolt system to dissipate the energy in the recoiling mass.  As such it can shoot high pressure 7.62X25 and relatively weak 9mm ammo at very low cyclic rates.  The resulting shooting experience is very smooth and controllable. 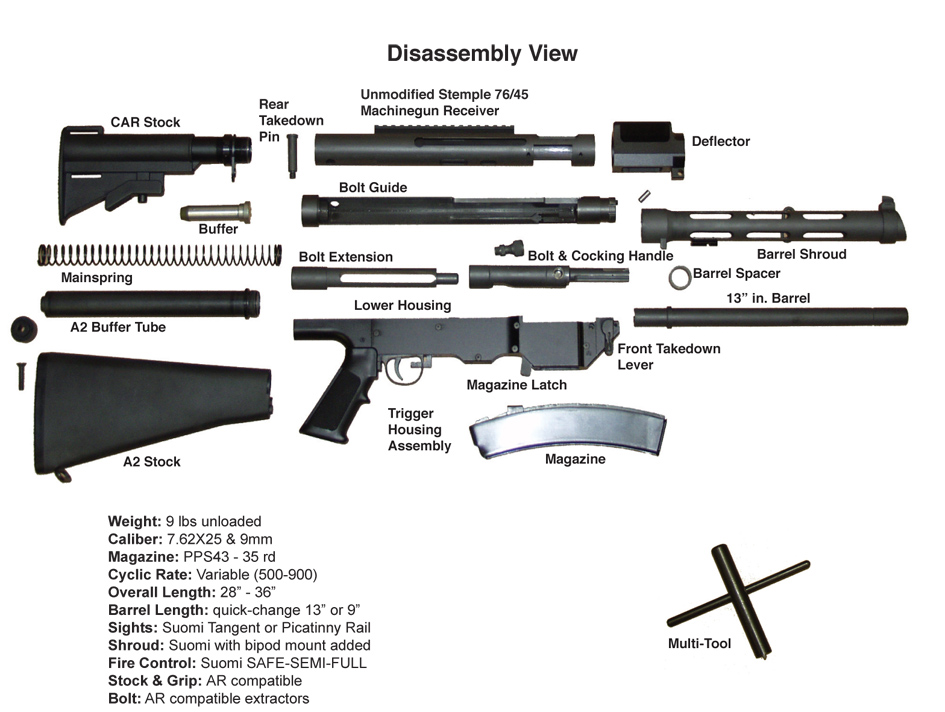 Building on John Stemple's & Hugo Schmeisser's work with slow-firing SMGs (pictured below), we have designed a similar parts package for the Stemple 76/45 to enable the reliable and consistent firing of surplus 7.62X25. These new parts are designed to work with the original/unmodified Stemple 76/45 machinegun receiver.

John designed a slow-firing 45 setup that relied on an extended bolt made possible by the use of an AR stock at the rear of the 76/45 receiver. This longer, heavier bolt that was similar in weight to the M3 Grease Gun bolt and successfully reduced the cyclic rate to approximately 500 to 550 rounds per minute with Wolf 45 ammo. With 'hotter' loads the gun would cycle faster, and with 'lighter' loads the gun would half-cycle and jam. Given the angle of ejection, the bolt must be moving fast enough to eject the spent case 'up' and 'out' of the ejection port unlike many other designs that are assisted by gravity. To compensate for lighter loads and his 9mm conversion, John's bolt extension could be adjusted by adding or removing segments.

Many makes of surplus 7.62X25 are wildly 'hot' cartridges and some 9mm loads only generate half the power of surplus 7.62X25. Therefore, we designed a similarly adjustable bolt system for the 76/45 that uses an AR compatible stock extension. The bolt assembly is comprised of 2 parts: bolt and extension. The system may use the myriad of available AR compatible mainsprings and buffers. The extension and buffer serve as the adjustment points for the overall weight of the moving mass during cycle. The video below shows this system functioning with the heaviest extension and hydraulic buffer, firing Romanian surplus 7.62X25. The resulting cyclic rate was approximately 525 rounds per minute.

To use this setup in 9mm, only the barrel and, possibly, the bolt extension require changing.

The stock and grip are unmodified AR pattern. Any AR compatible stock or grip can be used with our parts. The fire-control unit is M31 and capable of SAFE-SEMI-FULL. It is also available in full-auto-only.

The bolt guide slides into the inner diameter of the 76/45 receiver and contains the buffer mount, ejector and barrel jacket mount. We machined lugs on the front of the bolt guide to accept Suomi barrel shrouds or our newly manufactured shrouds.

The large ejection-port cover holds the 76/45 receiver to the fire control and magazine housing assembly and serves as a safety device to deflect 'port blast' possibly resulting from dirty surplus ammo or squib malfunctions.

There are no products listed under this category.