In 2003, the original inventor, John Stemple collaborated with BRP Corp to make new and replacement parts for the Stemple 76/45 receivers he manufactured prior to the 1986 cutoff.  From this came a series of compatible drop-on parts for the unmodified/transferable Stemple 76/45 receivers known as Stemple Takedown Gun (STG) setups.  Since nothing is welded or hand fitted to these receivers, changing setups and replacing parts is fast and easy.  These are the most finely built and smooth running sub-machine guns on the transferable market.  We build them for performance and durability, stock plenty of high-quality spare parts, and provide excellent service.

STG-76W (Stemple Suomi 9mm): The Stemple Suomi closely resembles the original Finnish KP31 by using the original Finnish KP31 wood stocks, sights, and shrouds.  The KP31 had some of the nicest 'furniture' ever put on a a sub machine gun.  It can be equipped with short M37 barrel/shroud, M31 barrel/shroud, or suppressed setup.  Bipods are available for all patterns.  To accommodate the sear location of the Stemple receiver, we designed as new trigger system based on the MP40.  Similarly, this configuration is full-auto-only. 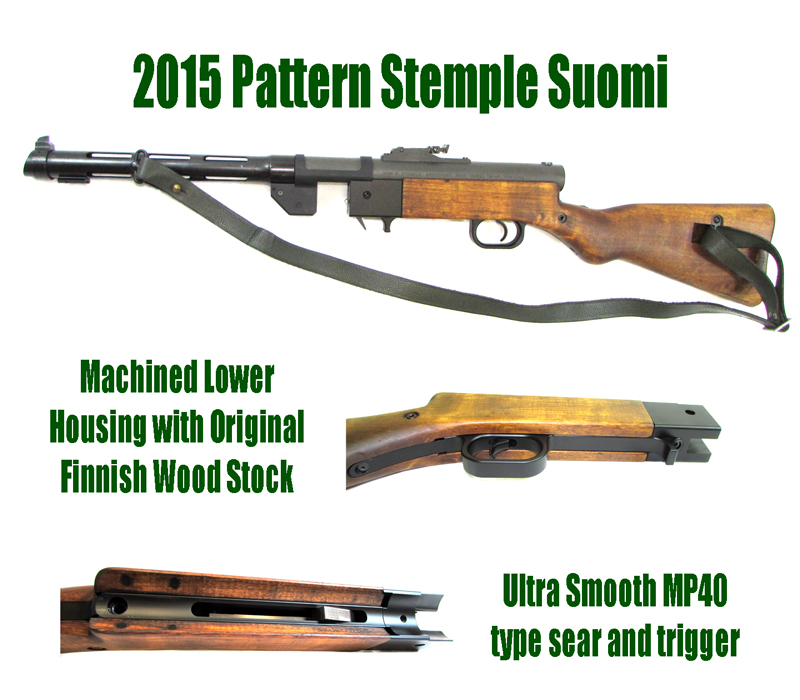 STG 76W is featured on the front cover of Shotgun News

An article about famous Finnish soldier who used the Suomi KP31:

Suomi KP31 in the Movies and the STG76W

Why the Suomi KP31 was so effective (approx 2 minute mark)... it's accurate, high capacity, and hard to run from, especially in the snow.  The Stemple Suomi setup has all the same attributes.